Click On A Caller's Photo To See His/Her Recordings

Buddy Weaver has consolidated the major square dance labels, Blue Star Music, Hi Hat Music, and Rawhide Music along with their subsidiary labels, under the banner of Buddy Weaver Music. 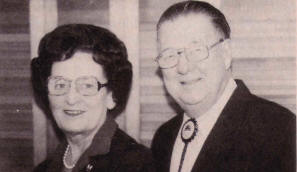 In April 1956, Norman and Nadine Merrbach released Blue Star 1501, "NEW BROOM" and "BLUE STAR HOEDOWN", a two-sided hoedown on 78-RPM shellac record. This was the start of what would become the largest and longest running square dance recording company in the world.

In 1971, the biggest name in calling was FRANK LANE, and to get him to join the Merrbach company, a special record label is created, named for the Lanes' famous square dance get-away in Estes Park, Colorado - DANCE RANCH RECORDS.

The BEE-SHARP RECORD label is formed and features the one-and-only DAVE TAYLOR in a series of workshop patter records.

The last new label formed under Norm Merrbach was PETTICOAT PATTER in 1982. To this day, it is the only record label with music recorded for women callers and featuring only ladies on the vocals.

Johnnie and Star Wykoff become owner/producers of all the Merrbach labels in 1987. BOB CAT RECORDS is acquired by the Wykoffs around 1990.

In 2002, all of the Merrbach labels and music rights are acquired by Buddy and Debra Weaver. DANCE RANCH becomes the first all-digital music label, releasing square dance singing calls and hoedowns on CD. 1 WORLD MUSIC is created in 2007 as a label to introduce the square dance world to the alternative sound of hoedown music. This hoedown sound would become a staple of square dance music within five years.

As a public service and a resource to perpetuate square dancing, all of the Blue Star, Dance Ranch, Hi Hat, and ELK album collections are digitized and made available, free of charge, through the Buddy Weaver Music Podcast. Podcasts began in 2018. 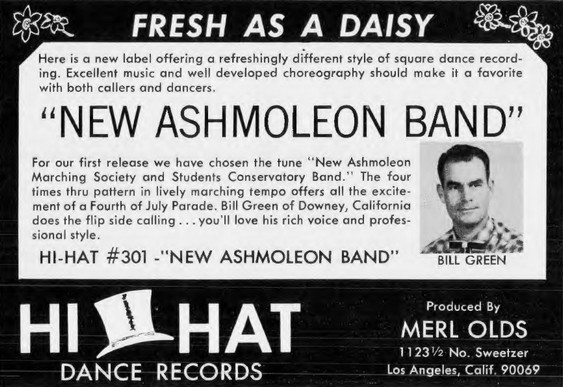 Between the years of 1950 and 1963, MERL OLDS, was producer of SETS IN ORDER RECORDS, a subsidiary of the famous square dance magazine owned by BOB OSGOOD. A prominent square dance caller and round dance teacher in the Los Angeles, California, Merl along with his wife Deliah, began using musicians who played for the Hollywood studios, to create their own record company. In 1963, HI HAT DANCE RECORDS premiered.

Even though Merl no longer produced SIO RECORDS, he continued his working friendship with Bob Osgood by doing the monthly music review service for SETS IN ORDER MAGAZINE 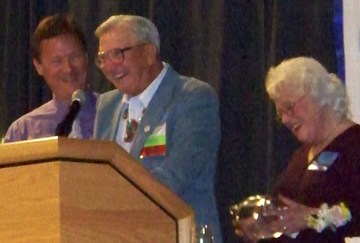 In 1976, ERNIE and LANI KINNEY acquire Hi Hat Square Dance Records (the Round Dance label is split off to another owner). Under the Kinneys, additional record labels are added - BLUE RIBBON RECORDS (1976), ELK RECORDS (1984), and DJ RECORDS (1993).

In 2004, all of the Kinney labels and music rights are acquired by Buddy and Debra Weaver. In 2019, the Hi Hat Round Dance library is brought back into the family. Classic rounds are digitized and rhythmically enhanced along with cues added for MP3 release.

Rawhide Records released its first two singing calls in March 1982. Founded by Dick and Becky Waibel, the label would be responsible for many square dancing classics. Music for Rawhide Records was done by Ken Carlton, who also did music for Hi Hat Records at the time. In 2006, Jim Kline became the music man for Rawhide and would continue until the label was retired in 2009.

In 2016, Rawhide and all it's subsidiary labels were purchased by Buddy & Debra Weaver. The name was changed to Rawhide Music and the label was given a new life as the home for square dance classic favorites. The only square dance music label to incorporate cutting edge techniques of converting analog sound to digital through baking tapes and virgin vinyl processing. Music from these one-of-a-kind methods is far superior to any and all other methods of converting to digital. Also, the only square dance music label to offer hoedowns for 99¢ to get callers using quality music instead of recording their scratchy old records to their computer.

FAMOUS CALLERS WHO DID THEIR FIRST RECORDING WITH BLUE STAR, HI HAT, OR RAWHIDE

This page address is: www.buddyweavermusic.com/staff.php
Last modified/updated on: Wednesday 2021-11-17 11:27:33 PST
§ (other pages on this website will have different dates) §